In The Beginning - Pre Red Shadows

The following is a brief history of how a guild on a medium sized server, playing in a medium sized realm, managed to grow from the ashes of a guild gutted by an all Swedish super guild (their words) to become the largest guild in Europe. Hopefully the next few pages will give people an insight into how and why RS operates the way it does. Why are we one of the few large guilds that have an open doors policy? How did we become alliance leaders? How and why do our alliance rules differ so much from all the other alliances? Where did we get our name? Why do we wear the colours we do? etc.


Firstly a little about me, Ste, the founder of Red Shadows and the Red Shadows Alliance (RSA). I joined Dark Age of Camelot a few weeks after it's release on the recommendation of a friend, Phil, who had been playing since day one.


I originally started life as an Albion on Prydwen. My first character was an infiltrator called Ste. In the very early days it would take literally days to gain just one level even around level 10. Phil and I used to duo our characters on ants and bandits outside Cotswold Village, 1 death would often be enough to wipe out any and all our gained xp in those days, so we could often be found fleeing for our lives towards the nearest tower and guards, usually to be greeted by other players also running from mobs from a different direction. Money was tight and 89% quality was considered extremely good. It makes me laugh to think of the people complaining now about the lack gold and how hard it is to xp.


I enjoyed the game as an Albion and by the time Battlegrounds had been introduced I had my infiltrator at level 24 and had him reasonably well kited out through doing quests for 89% quality armour and weapons. At this time there was no market explorer or ROG drops and definitely no spell crafting. Whilst playing in the BG's I found that I was able to compete very well with nearly all other classes but SB's. I decided to try and find out why and so I rolled one on Excalibur.


Within a few days of me starting my SB I was approached by the GM of the 'Hand of Loki' and asked if I was interested in joining a SB only guild. Up to this point I had never even considered joining a guild as by nature I'm more of the lone wolf type player (hence the infil and SB characters being my first choices) but I thought it was a novel idea and would give it a go.


Whilst in HoL I never really felt as though I fitted in. It seemed as though there was basically 2 groups within the guild. There was the guys who were already 50 and doing RvR and then they was the rest of us. At times it was next to impossible to get help from these guys and I remember on more than one occasion one of the high ranked HoL members, Jox, completely ignoring me when I would ask him questions in /gu. In fact the only time he ever talked to me was after he had been booted once for being a tw*t after getting drunk one night and slagging everyone and everything off. He pm'd me to ask me to ask the gm if he would be allowed back into the guild. Don't get me wrong I'm not saying they were all like that in fact most of the guys were fantastic but me and the other guys kind of got the impression that no matter how long we were in the guild we would never be welcome members of that inner circle. 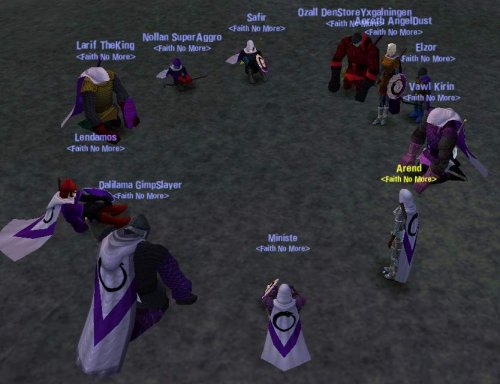 Towards the end of my time in HoL I was xp'ing one day and bumped into 2 trolls called Grunk (aka Aereth) and Koarn. They immediately invited me to join them xp'ing and we struck up a great friendship. Whilst xp'ing together over the weeks Aereth told me about how they were GM's of a guild called Faith No More and he repeatedly asked me to join them. Each time I turned him down he would say 'you'll join FNM one day'. Well that day came a few months later. I was starting to get disillusioned about life in HoL and was only staying with the guild out of some weird, misguided kind of loyalty. HoL was after all my first ever guild.


The straw that broke the camels back came after a friend and I in HoL had both dinged level 50 and we were trying to do our final encounter for the epic armour (which was still a big thing back in those days). We both asked if anyone could come along and help us both out. Nobody turned up, in fact very few even acknowledged our request. We did the epic quest in the end thanks to some random people who we bumped into whilst in Raumerik. I thought to myself 'If these random people whom i've never meet before are more prepared to help me than my own guild mates are, then I'm definitely in the wrong guild'. I immediately said a quick Goodbye in the guild channel and then typed /gc quit and asked Aereth if I would still be welcome in FNM, to my relief he said yes.

FNM was a completely different experience to HoL. People talked to each other about everyday things (even though a lot of the time it was in Swedish and I didn't understand a word of it) not just about different specs or items they used but also the inane things that friends talk about. Guild mates would also go out of their way to help each other, from the top rank to the bottom. The guild would go farming to help sponsor crafter's for the guilds etc. I felt at home straight away and FNM was probably the guild that shaped the majority of my thinking when I created RS.


After a few happy months in FNM I started having plans for guild events and handing them over to the officers and GM's in FNM but they never really ever got taken any further. They must of like my ideas, or maybe just my enthusiasm, as eventually I was promoted to the rank of officer. The guild kept growing and FNM started to become well known through out the realm. Whilst an officer in FNM there was little things that niggled me about the way that the guild was run and being the newest officer I didn't really see it as my place to start telling the GM's how to run their guild. Looking back on it I was stupid. What would they have done? basically taken my views on board and either acted on them or not, but for some reason I didn't speak out. I started getting itchy feet to try and run my own guild but decided that because I loved FNM so much I would never start a guild on Excalibur. Plan B then.

Kebab - July 2003:I just want you to know .. i feel abit bad about the way i left FNM.. but i hate doing things like that. it's like breaking up with a girl .. best way is too do it on phone

Former FNM member talking about the way he joined VG.