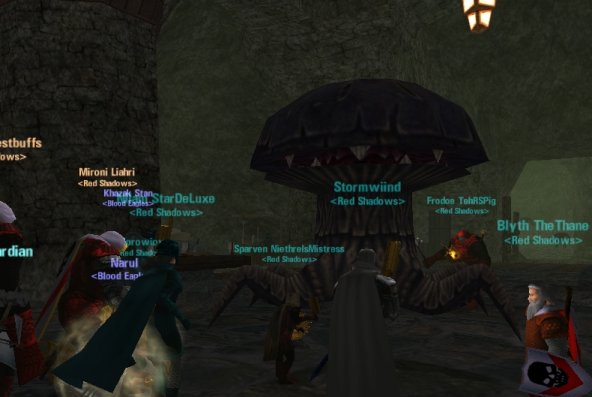 Anticipation of the New Frontiers

With TOA having been such a poor expansion in many players eyes and with WoW on the horizon Mythic decided to release a new RvR expansion called New Frontiers. Because we play in Europe we are usually many months behind the USA in terms of patches and expansions. Whilst we all sat around complaining about TOA we all watched to see what was happening stateside.


What we saw wasn't very promising. At one point all but 3 relics, on all servers, were in the hands of the Albion's. It seemed that NF had made the game into a proper RvR game, this was full zerg vs zerg warfare. Obviously the advantages would go to the realm with the largest zerg's and also the realm with the greatest range on it's spells and arrows. Both of these were advantages the Albion realm enjoyed.


Something that is quite unique to Midgard Excalibur is that not only do most of the people playing here only look out for themselves and their own guilds, most of them also seem to think that they are better players than their opponents in the other realms, and better than the Midgard players on other servers. It seemed to me that an awful lot of players, whilst acknowledging that it would be hard, thought that we would be the exception to the rule and keep the Albion horde at bay.


To combat this it seemed that all the big guilds decided to get together and plan a defence of the realm type alliance. Well when I say all the big guilds I mean every guild but RS. Why didn't we join in? Were we not interested in helping defend the realm? Of course we were! We were simply not invited. In fact we weren't even told about the talks taking place. I only found out about these talks when Rauthian (A self appointed leader of whom very few people, outside his close circle of friends, took any notice) pm'd me...


There are 2 things about this conversation that sums up the LFoM alliances relationship with the rest of the realm (and the quote above is all the involvement we had in the discussions about realm defence).


1) - The BIG guilds are having a meeting? hmm. I quickly did /gc who then checked us against all the other large guilds. Yup. We were still the biggest (by a good margin) but it seemed we weren't big enough to be brought into the big boys talks. This was typical of the LFoM's (and most especially Rauthian's) attitude to the game, they seemed to think that they dictated the law and how the game should be played in Midgard, because in their own minds they are the most important RvR guilds in the realm and anyone who doesn't follow them are obviously noobs or are simply unimportant within the big picture.


2) - were deciding what keep you will be allowed to claim. Were they now? That's kind of them. What would of happened if we had claimed a keep that they had not deemed us worthy of controlling? Or even worse what would of happened if we had refused to claim a keep they ordered us to claim? Would we be hounded out of Midgard? Would they have marched up and down outside the guild house with placards reading 'TRAITORS' or 'SCAB'S? It's one thing to lord it around your own alliances but try and enforce your play styles on another smacks of arrogance at best.


Because RS didn't currently hold 100k+ Bp's then we were apparently no use to them and there ended our involvement in the discussions for the defence of the realm. This didn't bother me and my officers too much as Rauthian is known by many throughout the realm but respected by few. He talks a lot but actually says very little.

It didn't take long for the Albion's in Europe to realise that they had a massive advantage and started to use it. It started with just one keep. As soon as they took Bledmeer Faste LFoM announced a CTA and WR soon followed. Even with every able body in Midgard turning up to defend there would of been very little we could of done


Very quickly the RSA /as channel had people spamming 'CTA!! Everyone get to Sva now!'. I checked the realm war map and saw that the Albs currently only owned 1 Midgard keep. I of course cancelled the CTA telling the alliance that 1 keep down was not a direct threat to the relics. Everybody was free to go, encouraged in fact, and repel the invaders but they would not be forced to drop everything and answer LFoM's call. Now considering that the RSA was considered too unimportant to be involved in the realm defense talks it seemed hypocritical, to me at least, to then start demanding that we answer their CTA's. RSA has always followed the same rules when it comes to CTA's. A CTA is issued when the relic keep (in OF) or the keep that opens the relic keeps gates comes under direct threat.


LFoM's leaders made a few critical mistakes that week. Firstly they issued a CTA far too early and then, secondly, kept it running for almost an entire week!! The third mistake was that they assumed that the whole realm would follow them without question, and those that didn't could be bullied into doing so. At the time LFoM and WR were both about the same size and both about 5 times larger than the RSA. I didn't see how our numbers would change the tide of the war and more importantly I knew that their tactics were wrong. Holding a CTA for a whole week dilutes the power of issuing a CTA and less people turn up to each one if it becomes over used. I spent most of that week canceling the CTA's that our members were being pressured into announcing over the alliance channel. At the end of the day it's only a game and sitting in a keep being bombed just isn't fun. As the week progressed it was obvious less and less WR and LFoM members were responding to their CTA, their members were either not bothering to log in or even going /anon. With the numbers of defenders diminishing everyday the pressure on the RSA increased to do as we were being told by the big boys.


I knew that the situation in the frontiers was bad so I would join the realm /BG and try and keep an eye on the situation, hopefully this would allow me to be in the best position to announce our CTA if needed. The only problem with this was that the /bg leaders seemed to be more concerned with Midgardians who weren't in the BG than those who were. The RSA was often slagged off during that week. I joined one BG being lead by Rauthian and to my utter dismay (and looking back at it amusement) I saw Rauthian actually spam his own instructions out of my chat box with his anti-RSA orientated verbal diarrhoea. I'm pretty sure I wasn't the only RSA member who left the defense BG in these situations. Rauthian in my opinion was once again showing that he has NO aptitude towards being a defense leader. Not only was he spamming his own instructions out of peoples chat boxes he was also going out of his way to alienate potential allies and directing his energy's away from the task at hand.


Now the previous statements might make it look as though RS and the RSA alliance didn't take any part in the early defence of the realm. The fact was that RS were often running between 1 and 2 full groups of people in RvR (not always as fg's though, a lot joined PUG's and ran with them). The defence leaders needed an excuse as to why we weren't repelling the invaders. RSA were simply the best get out clause in that it directed the dissapointment of the realm onto us and away from the bad leadership qualitys of the current self appointed realm leaders. Blaming the PvE alliance that consisted of less than 10% of the population, especially for a RvR problem, might seem silly looking back on it but it worked. We were deemed the realms bad guys.

A GM in LFoM Jan 2005
However... Being the strongest alliance would imo also give us the right more or less to dictate how our frontier should be guarded, and I'm pretty sure RS and other alliances would only apreciate FoM handling it.
A GM in the LFoM alliance discussing how the future of realm defense should be organised.