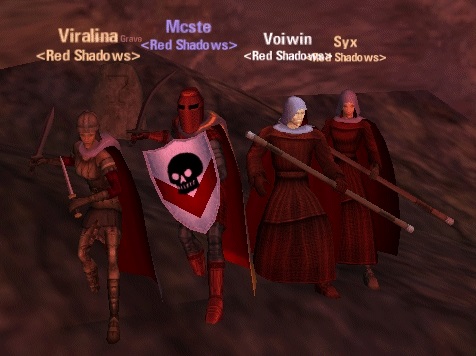 I decided to return to Prydwen part time and create a new guild. I went through many names in my head but eventually came up with the name Red Shadows. The Red Shadows were the original bad guys in a comic book, from my childhood days, called Battle Action Force. I owned all the figures and vehicles and my best mate owned all the good guys (Action Force) and we used to have big battles together in his garden. The colour scheme was red and black, to mimic the original figures. The original figures didn't wear cloaks but they did used to have skull emblems on their helmets. The cloak I eventually decided on was a skull on a white background over a red chevron.


In the early days RS was populated mainly by people from excalibur having a break from midgard and my old friends from my early days as an infil on prywden. I was still mainly based on Excalibur but found myself spending more and more time on Prydwen to try and get the guild sorted out. Roughly 2 months after I had started RS on Prywden everything just went pear shaped big time with FNM.

Faith No More is no more.

I logged onto excalibur one afternoon and almost immediately got a pm from one of the then GM's, Lendamos. He asked me to type /gc who, which I did, and discovered there was only 3 or 4 members online and none of them high level. Confused I asked him where everyone was and he replied with 'type /who Vintergatan'. Sure enough there was all our level 50 members. I asked him what had happened and he said that FNM and Vintergatan had merged together despite the FNM GM's saying no to the merger when Vintergatan announced that only Swedish players would be allowed to join them. It then dawned on me that Lenda was also level 50 but I hadn't seen his name in either guild list. I asked him what he was doing and he replied that he felt that he needed to join a large guild to get involved in some of the more interesting raids etc. Now that FNM was basically down to it's GM's and low levels we couldn't offer anything really to keep level 50's. Lenda, the only other current level 50 had quit FNM, I couldn't blame him as I was about to do the same.


I resented a lot of people for a long time over that incident. I was pissed off with the way they had done it whilst Aereth was away on holiday. I resented how a lot of officers and high ranking members had simply jumped ship to get a higher status in a new guild. I resented how a lot of them had swapped guilds like they were changing shirts and not 1 had had the decency to say they were leaving or why they were leaving. I resented the fact that a lot of people who I had thought were friends had joined another guild knowing that me and a lot of other members couldn't join them. Most of all I resented the fact that I had gotten the shitty end of the stick and was the one who had tell all the remaining members of FNM what had happened and to try explain why. Those were the worst DaoC days of my life. Constantly having to repeat the story of what had happened to every low level or non Swede who logged in and answering the same questions 'why?' 'Is it because of us?' 'can we join them in vintergatan?' 'why not?' 'what's going to happen now?'.


I decided at that point that I was going to create an 'Anti-Vintergatan' guild. Not specifically a guild to try and destroy all things Vintergatan but to show that you didn't have to be a bunch of self centered greedy c*nts to create a 'Super-Guild' as one of their members laughably referred to themselves as. I had a very hard decision to make. Basically I had 2 choices. 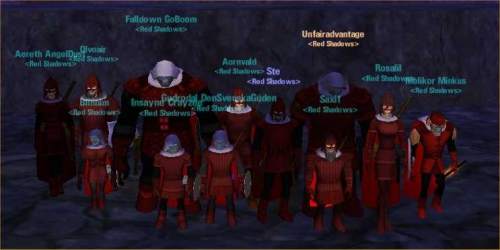 Why did I choose to create a new guild? Well basically I wanted a free hand. I wanted to try some different approaches to guild management and even if Aereth had let me take over the running of FNM I personally wouldn't of felt comfortable making the changes that needed making. Another large factor was that FNM and VG were still in the same alliance and couldn't be removed as all the gm's were either on holiday or had quit the guild. I refused to share an alliance with them for a moment longer than I had to.


And so one of the worst conversations I've ever had to endure loomed. I had to tell the remaining FNM members that their last level 50 was also jumping ship. I felt a complete cunt, talk about kicking a dog when it's down. But it had to be done and I resolved myself to telling them I was leaving. It wasn't the most pleasant conversation i've ever had with my guild, and I answered much the same questions as I'd been asked when I informed them all about the FNM/VG merger. At least I had the satisfaction of knowing I had had the balls to tell them what was going on honestly and openly before quitting. They were all great about it, if a little disappointed and confused as to my answers, but it was done. I decided I would recruit no FNM members into RS incase Aereth decided he wanted to try and rebuild the guild.


A few days later I created Red Shadows on Excalibur. I, for some reason, thought it would feasible to run RS on 2 servers at the same time and so RS Excalibur was born. To my immense surprise and joy I discovered that Midgard also had a skull emblem and nobody was using it with a royal red chevron. So now I had pretty much identical looking guilds on both servers.

In the beginning - Pre RS

Frodal's insensitive reply to Aereth's FNM epitaph. This was one of the first replies to the actual announcement that FNM as a guild was no more and the only thing that seemed to bother the VG member was what was going to happen FNM's forum. He helpfully gave a few suggestions.