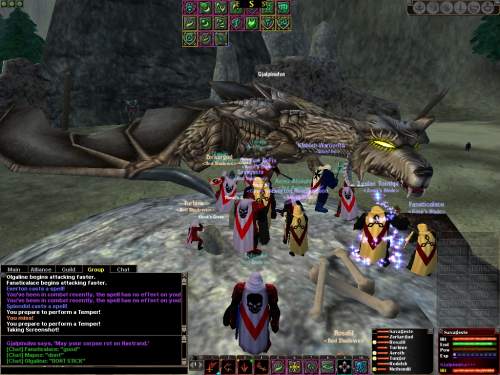 And never a truer word has been written. To start RS consisted of some friends alt's Lenda, Kenwolf, Feniar, Rodelsb, and the future GM's of RS Albion, Kaspien and Sye and I even had to pay someone to join my group just to get enough people to start a guild. I was probably the only full time member of RS when the guild was created. Not the most promising of starts for a guild that was later to become the largest guild in Europe.


3 or 4 days after RS was created Aereth returned from his holiday. As soon as he flagged up on my friends monitor I pm'd him to give him the bad news. He was devastated, and even talked about packing the game in altogether. After we had talked a while he decided that was going to go away for a while, talk to the remaining members of FNM and then decide what to do. I told him that should he decide that he didn't want to try and rebuild FNM then he was more than welcome to join me in RS and if he decided to join me then the offer of course also extended to all the other remaining FNM members.


Less than a week later all the remaining FNM members had joined me in RS. I decided that I wouldn't be able to run everything on my own and so asked Aereth if he wouldn't mind helping out as a GM, I needed someone experienced to help look after guild matters whilst I pushed forward my plans for expansion. Aereth accepted and so RS had 2 GM's. Now I'm not a fan of equal number gm's. I like decisions to be made, even if they're wrong, and so I decided that we would need 1 more GM so that if it ever came to an argument over a decision the vote would always be a yes or no, no split decision and thus no action taken. I decided to ask lenda if he would join as a GM. He turned me down saying he had just joined White rose and was really enjoying being a part of a large guild, he did recommend Gudrodal to me though and so our 3rd GM was created.


As I was now back to spending 100% of my time on Excalibur I promoted Dav, Kaspien, Sye and Phil to joint gm's on Prywden and effectively became a silent partner. The story of RS alb from here on in will have to be told by one of them another day.


I decided at that point that I was going to create an 'Anti-Vintergatan' guild. Not specifically a guild to try and destroy all things Vintergatan but to show that you didn't have to be a bunch of self centered greedy c*nts to create a 'Super-Guild' as one of their members laughably referred to themselves as. I had a very hard decision to make. Basically I had 2 choices.

When the FNM members joined RS Aereth posted on the FNM alliance forums....


Looking back on it VG's reply on the forums was, whilst very hurtful at the time, probably the best reply anyone could of ever said for an emerging RS guild................

Wow. What an immaculately self centered and inconsiderate reply to place on the announcement by a GM of the death of his guild. If I was trying to wind someone up I don't think I could of done a better job if I had tried. Fancy posting things like cleaning of the FNM section and clean out users who didn't join VG after the merge or hand over admin of the site to VG. It seemed that when they took all FNM's members they also assumed that they would then automatically become the leaders of the alliance and we would just hand over our forum. They had ruined our guild and now wanted to boot us from our own forum! Unbelievable! For months all I could think of when I thought of VG was 'wankers'.


If I had ever lacked resolve to make a go of RS then they had just given it to me in bundles. This was war as far as I was concerned. The first thing I did was remove FNM from what was left of the old alliance (tbh most of the guilds (KS, SR and FNM) had been swallowed up by VG anyway) and join them to the RSA so that we could see if anyone who hadn't logged in for a while logged in. The second thing I did was talk to the gm of the last independent guild in the alliance Norlands Guld. I managed to convince him that what VG had done was not what alliance guilds would do to each other and that he should join the RS alliance as we were looking to make a new alliance where partner guilds helped each other rather than stabbed each other in the back. He agreed and joined us.


This was great as I then had something to have a go at VG with over the forums. RS now had a new alliance consisting of RS, NG and Nightwolves

Frodal's insensitive reply to Aereth's FNM epitaph. This was one of the first replies to the actual announcement that FNM as a guild was no more and the only thing that seemed to bother the VG member was what was going to happen FNM's forum. He helpfully gave a few suggestions.