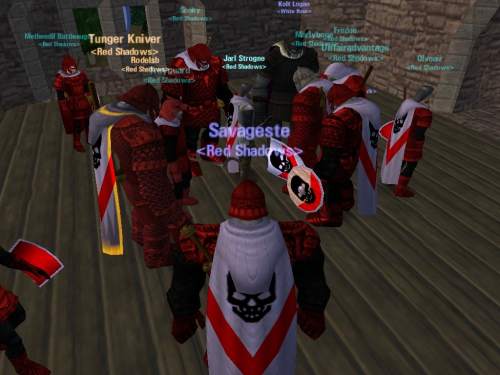 Arguments between the 2 guilds continued apace over the forum especially when I replied to the previous quote with my usual sarcasm....


Well, vintergatan has almost removed all traces of FNM, why not finish the job. Seriously tho, that comment would of been better in the VG section. FNM may be dead now but there's no need to keep reminding us and btw, vintergatan is now the lead guild in the alliance, but I think u'll also find, coincidently, that ur the only guild left in the alliance.


This came as a shock to VG, and they even offered RS the chance rejoin their alliance, twice, if we could stop being so bull headed and forget what had happened...


Uhm.. I wouldnt mind creating a new alliance with you guys.. in my own personal opinion. We could start a new bond and bury the hatchet at the same time. A forum is already set to be used for the alliance purpose


and I personally held my hand out earlier so we could keep a future alliance, but that hand was neglected and thought of as bad policy since you cant play with us anymore. We might steal your highlvls again, or something..
Im holding it out again, dont disregard it this time ..
We can play together, if we swallow a bit of that stupid pride of ours...


They even claimed that everything would be better within the alliance now with more events being planned etc. They had no reply to my question...


They even claimed that everything would be better within the alliance now with more events being planned etc. They had no reply to my question...
And one last thing, seeing as all our members left to join your guild because the alliance didn't organise anything, what makes you think that things will change now? It would all be the same members in the same alliance just in different guilds??? I fail to see how that would make things suddenly ok? 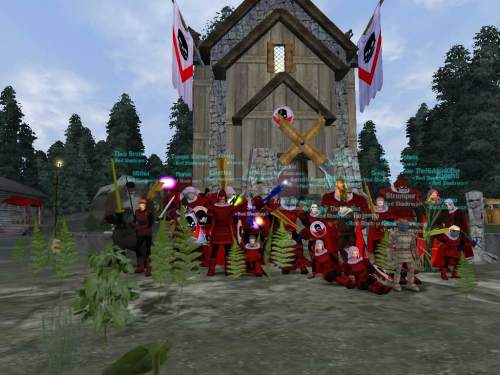 At this point I was searching Duskwave for similar sized guilds to join the alliance. I approached Perfect Circle, Carnie Folk and Sarumans Hand with offers to join a unique and friendly alliance, they all basically told me to FO in the nicest possible way. I was starting to think we wouldn't find anymore guilds when Aereth announced that he had persuaded a guild called Dragons Breath to join us. I was quite chuffed with this as it was the first guild not from the old alliance to join us. My joy turned to dismay once I found out that DB had already been in an alliance though, and they had quit it to join us, I didn't want us to build an alliance in the same way that VG were building theirs. I pm'd the leaders of DB's old alliance and they basically told me that the alliance was as good as dead anyway as nobody ever talked to anyone and would it be ok if the rest of their old alliance joined us? Fantastic! Aereth had just earned us 3 more guilds namely DB, Darkspawn Ravens and Suicidal Tendencies. RS had also grown and we were boasting an average of 6-7 members online every night!


During those early days I quickly realised that RS members would stand out in a crowd, I put this down to our colour schemes. We basically had a scarlet and black colour scheme to match the black skull and red chevron on our cloaks. Everyone else seemed to be wearing pastel colours and have hammers or axes as their emblems. It was often very hard to differentiate between different guilds without having a good look at their colours/emblem. Even though we stood out I decided then that we should change the colour scheme from scarlet to royal red to make us stand out that little bit more. Now RS was probably the most easily identifiable guild running around Midgard, the royal reds clashed very well with everyone else who was wearing light blue/green and I still think to this day that our emblem is the best in the game. Another bonus of using a bright colour scheme is that it gives the impression that there are more of us when we move around in a group. I was once pm'd by several people, when 2 full groups of RS turned up to help defend the relic keep in Old Frontiers, with compliments on our massive turnout for the defense. The fact was there was quite a few guilds with the same numbers as us but we stood out like sore thumbs. 16 trolls wearing bright red and black at first glance looks like 20+.

Frodal - July 2003 Uhm.. I wouldnt mind creating a new alliance with you guys.. in my own personal opinion. We could start a new bond and bury the hatchet at the same time.

Frodal offering to allow RS to join the new uber VG alliance. I turned it down as I assumed that with VG's record with alliance guilds I would find the hatchet buried in my back.