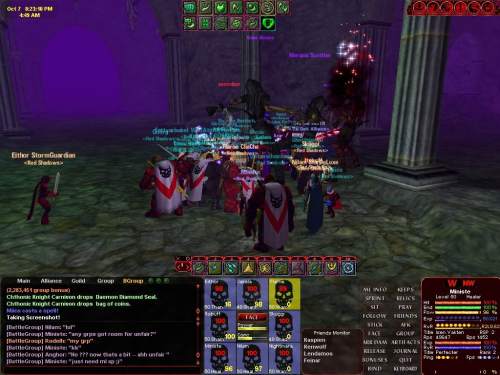 RS had grown to a large size by the summer of 2004. We were averaging 20-25 members online everyday. This was starting to cause me problems though. Due to the fact that I was fulfilling the dual role of RS GM and alliance leader I as getting about 8 pms before the client had loaded up when I logged in. If I spent 4 hours online a night I was spending 2-3 of them dealing with guild/alliance problems. What people who aren't gm's don't seem to realise is that whenever anyone has any kind of problem or enquiry about a guild they always ask for the GM, which means you can be dealing with stuff that isn't necessarily trivial but could easily be dealt with by officers. Things like guild invites or questions about being allowed to take items from the guild vaults etc.


At the time RS had 3 GM's me, Aereth and Gudrodal. Gudrodal was the silent master and most people wouldn't really know he was GM because he kept to himself mostly. Aereth was the exact opposite, he could quite happily spam /gu and /as with 'be the ball' type macro's and was a regular chatter box that would keep the /gu channel flowing. This was all very well and good but by making himself the guild joker he increased his popularity with the members but also greatly decreased his chances of members bringing any problems to him. Put yourself in their shoes, if you had a delicate problem who do you take it to? the sensible one or the one who's usually clowning around? 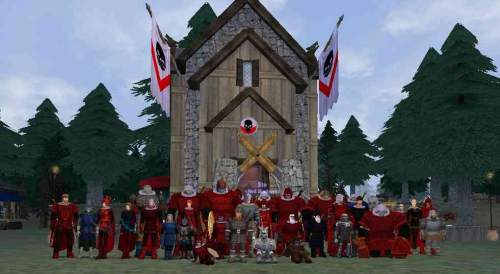 I had also noticed that some officers just weren't pulling their weight and that coupled with a rank structure designed for a small guild consisting mainly of friends I decided to make the hardest decision of my GM life...


I pretty much sacked all the gm's and officers! Everybody was demoted to the rank of Red Shadow (the standard level 50 rank). Now in my opinion it shows how big a personality the officers and especially the gm's had to take this on the chin and accept it. I put a poll on the forum for the new rank structures. They were basically different flavours on one scheme. We would have 1 GM some Lords (who dealt with running the guild) and Warlords who would organise events concentrating on RvR and then they was officers who were expected to help guild members out but not expected to organise regular events. I then put a post for each rank on the forum and people would apply for the posts (I even said that if someone wanted to become the new GM we could have a vote and if I lost I would fully support the new leader. Thankfully no-one contested me for the role). That way the posts would only be filled with people who actually wanted to fill the roles.


This was the biggest gamble I have ever taken with RS and luckily it worked a charm. I could of been singularly running RS with no officers after pissing them all off. I can't say how lucky I am to be surrounded by such sound characters.The structure is pretty much the same structure we use to this day. At the end of the day most people were fulfilling the same roles they had before but the difference now was that everyone from officers to normal members knew what each others jobs were and they approached the roles with a new vigour. The other beauty of this was that new members could check the forums and see that it is possible for anyone to climb the ranks within RS, as long as they show the right attitude to the game.

Abusive 2004
Abusive - In this mode the guild can't become strong and need 1 as u see the albs have all str relics
Ste - I think u'll find the guilds doing very well atm
Abusive - with ppls like frodoe nope.
Abusive telling me to remove frodoe from the guild because he had refused to group with him.
Annihilator - See how your guild loses members
Abusive trying to prove his point by removing his alts after I refused to remove frodoe.