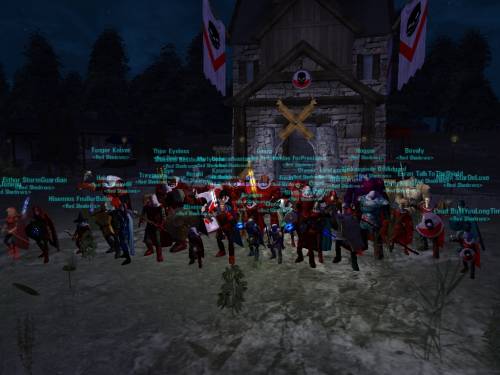 With the clustering of Prydwen and Excalibur on the cards it was imperative that all the GM's of Midgard, from both servers, find a place to organise the defence of the realm. As the weeks drew on it became more apparent that unless RSA did something we would enter the cluster not knowing any of our Prydwen comrades. It seemed to me that everybody else was waiting for everybody else to organise something. So it fell to the RSA (you know the PvE alliance that don't give a f*ck about the realm - allegedly) to step forward and get things moving. I approached Phil and asked him if it would be possible to extend the alliance forums and create a new X-server GM's sub forum. He of course said yes and set about creating a new section of the forum that would be available only to GM's of the realm.


Now that was the easy part. How did we go about getting the GM's to sign up? Well this was a case of spamming the general forums and also registering on some of the other alliances forums and asking them to all join up. Apart from the few typical trolls on FH most people took to the idea pretty well.


So well in fact that the forum currently has over 120 GM's signed up from over 60 Midgard guilds across both servers. I immediately started to make plans for the realm defence and asked for GM's to volunteer their guilds to claim keeps/towers on cluster day. By the time the cluster day arrived we had all but 2 minor towers accounted for. The new forum was also used by some of the realm leaders for making plans for relic raids etc. It looked as though for the first time Midgard might actually be working as a unified realm. This was further shown when on one occasion Durgi, a raid leader from Prydwen, had to open up a second BG (each BG has a maximum limit of 200) due to the sheer numbers of Mids turning up for one relic raid.

Shortly after merging the 2 English servers GOA announced that they would be creating a new 'classic' server. This appealed to quite a number of people, myself included, who had grown disillusioned with the game after the TOA expansion. It would be interesting to see how many people would give up the last 3-4 years of work and start a fresh on a new server.


With the coming of the new servers came a new management team for RS. I, as a GM, had fulfilled all my personal goals. I had been GM from the beginning and seen us grow from 1 active member to becoming the largest guild in Europe. We had proven VG wrong. You can create a 'super guild' without the need for aggressively assimilating smaller guilds. We had proven that. Also where are VG now?

My second goal had been to increase the alliance and show that the /as can be used for more than just reporting enemy movements. We had done that also. An alliance where allies actually freely communicate and help each other! It's seems silly now but we were ridiculed for a long time when we first started this. I had many a conversation with 'knowledgable' people telling me how my alliance would have to change and that our rules would just lead to an unruley and chaotic alliance channel. How, despite constantly gowing, our alliance would falter and then colapse as we were doing it completly wrong etc.


So with no new personal goals for me as GM I decided to step down after Mythic released their 'guild' patch. This patch brought in more complications for GM's. E.g. The fact that there was guild buffs etc that had to be renewed every day meant that it now became harder for a guild to operate efficiently with only 1 GM (unless he/she played 24/7). So, after a vote of the officers, I promoted Phil and Goorg to co-GM status also. At the time I also announced that once the classic servers were launched I would step down as GM and Rejenna would step up a rank and keep the number of GM's at 3.


Just before the launch of the classic servers phil also announced that he would be moving over part time and like me he felt that if he wasn't offering 100% to the role of GM then it should go to another. And so Olvoair became the latest officer to step up to GM rank and that's where we stand now at the time of writing. The GM's of the Red Shadows are Goorg, Rejenna and Olvoair. 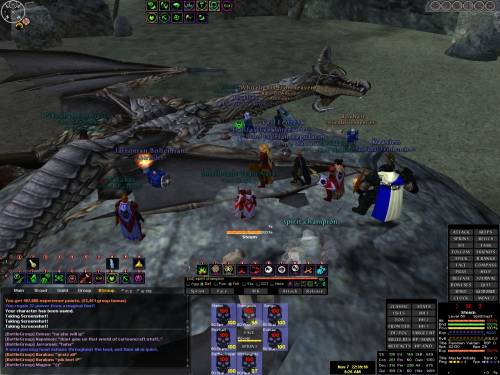 From the begginning it has been RS's goal to have an open and transparent format for both the guild and the alliance. Guild members can clearly see from the forums that all members are able to apply to become an officer. This is where we differ from many guilds. Many guilds automatically promote members to officer status after a set time or through friendships etc. We believe that by making a member apply through his own initiative (and then we decide on wether they have the qualitys or not) we get officers with not only the ability but also, importantly, the drive to do the job.
In respects to the alliance we differ massivly from most other alliance leaders also. RS as a guild could quite easly hold the majority of our raids within the guild only. It's very rare that we do though. When a RS leader organises a raid it is, 95% of the time, a RSA event where any alliance member is free to join. When talking to the newest LFoM alliance leader about how he could increase the desirability of his alliance for new guilds I suggested that they organise some alliance wide PvE events. His reply was that TDA (the new LFoM leaders) do all their PvE within the guild and he would struggle to get his members to accept none guild members joining in their events.


They're not the only ones and this in my opinion is one of the reasons why the other alliances are struggling. All the guilds are looking introvertly, pouring all their resources into only protecting their own guilds. It's a very short sighted attitude. Do they think that if they organise these events, that incorporates none guildies as well, that less people will feel as though they need to join their guild to get a piece of the action? It sounds a reasonable explanation. The fact is looking at RS or any other RSA guild shows that it's quite the opposite. Our guilds have weathered the WoW, TOA, classic storms better than most. By refusing to pool their resources, for more than RR's, all the guilds in the more strict alliances are doing is isolating themselves and thus they are all slowly dieing a death as their members move to more active guilds. RS probably account for 50% of the online population of the RSA and that leaves another 50% that if we incorporate into our events means we can do them twice as big for twice the fun. It also means that by sharing events theres also twice as many raid leaders (from our allies) which therefor theoretically means we can have twice as many events for our members. Surely thats better than having 7 or 8 guilds, of 6-7 people each, doing nothing because they can't raise the numbers to do a TG/DF/DS/Artifact/ML raid etc?


Finally on a personal note...


It's been a very long and very satisfying journey as GM of RS. I hope that any who have read this would be encouraged to to try their hand at it. It adds an entirely new level to your gaming experience. Yes it can be hard, annoying and time consuming but it can be equally fulfilling and pleasurable. More so in my case. Incidently I also found that the larger a guild becomes the easier it is to lead! It may sound strange but when I first started I would spend 80% of my time doing guild and alliance related duties. Just before I stepped down I would only spend maybe 10%, maybe not even that. The other thing that happens is that people listen more when your the leader of a big guild. It's understandable as to why but just because I was the GM of a guild that averaged 30+ online everynight it doesn't mean I know more than the GM of a 3-4 man guild. I can name people who have pushed to become alliance leaders, which would add 50-60 peoples weight to their arguments, and they would still be talking bollocks 99% of the time, but people would start to listen. I guess it's a perk of the job but one that comes in very handy. Would I of had the same problems with Valour of Valhalla if they had tried the same tricks now? Would LFoM have been so quick to ruin our event now that RSA is twice their size etc? Would alliance GM's have been as quick to argue with me when I have had to intervene when 2 alliance guilds have fallen out (which happened quite a lot in the early days)? I find it an interesting thought. Having said that I doubt I would of enjoyed it had it been an easy ride.


Over the past 3 years I don't regret any of the decisions I made as GM, and don't look back on any of the arguments with other guilds or alliances with anger (I actually quite enjoyed most of them truth be told). I also want to make it clear that although there's a few people who get a bit of a beasting from this history report I don't hold any grudges against anybody or any guild. Whilst I wouldn't have nice long conversations with them about the weather, over tea and biscuits etc, I certainly would still help any of them out, or group with them if asked.


I think also it would be only fair to name some of the officers who have gone above and beyond the call of duty and helped fashion the guild into what it is today. In alphabetical order...


N.b. There are many missing from this list. I have probably forgotten some. But these guys listed above are the people who have given up large parts of their lives to improve the guild and alliance and have all contributed to the key points in our history in some fashion or another. There's many more officers that aren't listed and they have all done their jobs brilliantly but I fear I would suffer RSI if I was to name them all.

Kathal : Posted: Thu Nov 10, 2005 9:35 am Post subject:
Guess there should be room for childish and pathetic ppl in DAoC, but just not in our /as.
Kathal : Posted: Fri Nov 11, 2005 10:23 am Post subject:
”alienated a large proportion of the realm” It’s some childish ppl in a few guilds that have a big mouth and a small brain. Yet you are their voice on this forum.
In the same thread...
I’m not trying to be funny here, but are you jerking off while saying this?
Kathal, bless him, once again shooting himself in the foot. No more than 24 hours after boasting that he's winning his campaign to rid his alliance of childish and pathetic people he starts accusing people of masturbating whilst arguing with him.