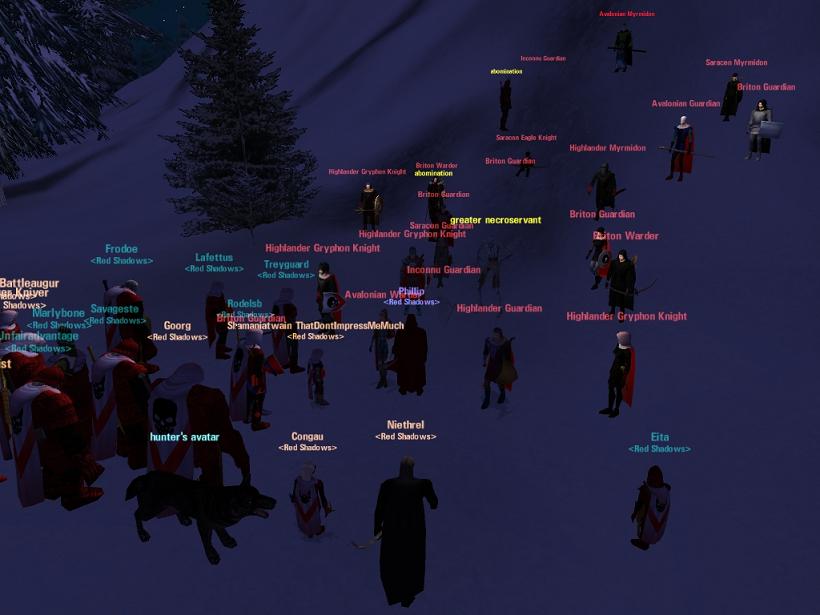 During the spring in 2004 I was pm'd over our forum by the GM of an Albion guild called ASq. He said that their guild was the one that shared the Albion equivalent of our guild colours and emblem. He was wondering if we would be interested in organising a x-realm event. I thought this would be fun but I wasn't exactly sure were we stood in terms of the COC. I therefore emailed GOA and asked them for their opinions on the matter. They replied by telling us that dueling was a bannable offense but x-realm games like 'King of the Hill' or 'Hostage and Rescue' would receive their full support. With this I then contacted the ASq gm and told him we would be up for it.


About a month later all the preparations were done (sorting the rules, finding a secluded venue etc) and the event took place in Yggdrsil Forest. OR it would have if it hadn't been for a Sarumans Hand member called Pep stumbling across us. Both me and Rodelsb pm'd him straight away and explained what was going on. I even invited him to come along and observe the event. He didn't reply. It seems he was too busy announcing a relic raid of at least 5fg's (3fg more than there was. I guess counting isn't his strong point) and organising a SH group to come along and earn some rp's.


We were fighting against the clock now. We knew if we wanted to salvage anything from this we had to do the event quickly as we knew that there would be a large mid force inc. We started the event by donating one of our low level members to ASq as a hostage and then them trying to stop us from taking him back. We would win if we could retrieve him and ASq would win if they could wipe the rescue force. Should the hostage die the game would be tied. By the time we started Thorarin had also turned up and demanded to know what was going on. We quickly explained and he said he would allow us to hold our event. Within a few seconds of us attacking the defending force Thorarin started to do as thanes do best and started using his AOE spells and nuking the the ASq team. He later justified this by saying that he had deemed this to be a rp farming exercise and had decided to put a stop to it (self proclaimed judge, jury and executioner if you like). By this time Peps mates from Sarumans Hand had turned up with a load of other LFoM groups, I and a load of RS officers joined their Realm defence CG and explained what was going on to try and salvage the situation. The leader of the White Rose alliance listened and said ok good luck with your event, unfortunately the LFoM alliance decided it was going to destroy it for us and proceeded to wipe out the ASq team, whilst calling us a bunch of cheating twats who were only upset because our RP farming exercise had been discovered and stopped. To be fair to the FoM guild, who lead the LFoM alliance, they didn't actually attack anybody but did stand there giving me lectures on how they would be reporting me and my guild for cheating and basically telling me that if I wanted to do things like this I should inform them first. This was my first, and unfortunately not last, experience of coming head to head with LFoM thinking that they ran the realm of Midgard. 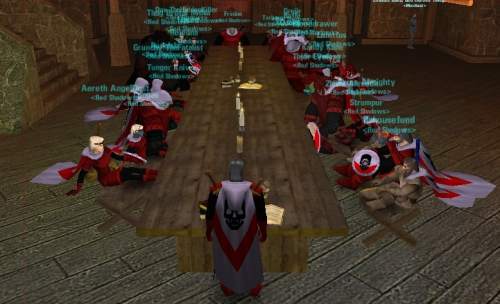 Thus followed a big argument between us and LFoM. Had the tale ended there, then all well and good. They killed the Albs in the frontiers, as they're entitled to do, and there was nothing we could do about it. They had obeyed the CoC but acted rashly and with no thought to anyone else other than themselves (it's quite amusing looking back when the very same people then started flooding the public forums with complaints about NP and BC et all for stealing artifacts/encounters in TOA, saying things like 'Yes you didn't break the CoC but do you really have to go out of your way to destroy other peoples raids. Couldn't you have just shown some manners and waited??' Hypocrites one and all in my humble opinion).


But the story didn't finish there. After the event had been ruined I posted on the RSA's own forum what had happened. The title was 'RSA event ruined by LFoM'. The leader of FoM then replied saying that I should change the name of the thread as he found it offensive. I told him it's the best description for the thread as that's was exactly what had happened. Various members of the LFoM alliance then posted on the topic with everything from justifications, to accusations of cheating to telling us that we should from now on inform LFoM of every single event we planned in the future. This was annoying. LFoM were living up to their reputation for being arrogant elite wannabe bully boys.


The most annoying part of the event though was that there seemed to be members of LFoM that had a real vendetta against RS and they were doing their level best to ruin the guild and get me and my fellow guildies banned from the game (long live the spirit of Midgard!). Despite me giving all the LFoM members who turned up a url of where I had posted GOA's email to me, actually suggesting the event to us! Some of them decided to try get us banned by informing GOA that we had been holding rp farming sessions disguised as dueling comps. When this failed they then dug deep around the bottom of the 'petty barrel' and complained that after they had ruined our event some RS members had said some naughty words. I was later informed by Ardamel that the person behind all this had been a pleb called Rauthian from a guild called Realm Defenders. Ardamel hadn't agreed with Rauthians actions but not spoken out against him at the time. This was a little worring to be honest. The guy who everyone outside the RSA seemed to look at as the leader of the realm, seemed to show very little backbone when it came to disciplining trouble makers. I hoped this would be a one off but unfortunately I was to be dissapointed.


GOA emailed me a few days later and basically said that even though some people had knowingly destroyed our event could I please ask my members to curb their language. GOA were going through the motions and we both knew it. They weren't going to ban anyone. I asked them to provide me with a list of names of who had said what and I would discipline them. Guess what? No list.

(Lack of) Valour of Valhalla