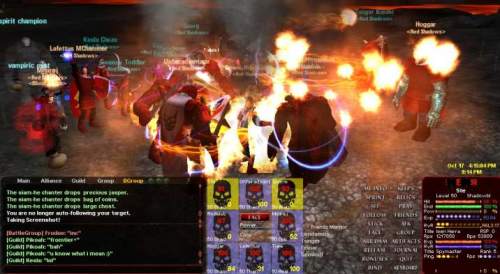 Everything seemed to be going swimmingly. The alliance was using the /as channel as I hoped they would and we were acting as though we were almost 1 large guild. Things then went a little pair shaped for Darkspawn Ravens, but this ultimately turned into one of the turning points for RS as a guild. Alpachino (the GM of DR) pm'd me one afternoon and asked whether I would be willing to take on some of his guild mates. I asked why and he told me that he was quitting the guild and that he and some of the other members were forming a RvR guild. The guild was called Twilight and was run by a guy called Banda. I of course agreed to take any DR members that wanted to join us as I already knew that they were pretty much RS material as we had done many joint ventures together previously. As the DR members joined RS I asked them why they hadn't followed their gm and joined the RvR guild? Of all the replies I got the most common was 'Just look at the new guilds website and tell me you would want to join that?' So I had a look. The guild seemed to be set up as a small dictatorship with some astonishing rules...


No alt's within the guild unless they're to be used for guild RvR.
No level 50 alt's are to be allowed into any other guild.
When the GM says so everybody has to drop everything, no matter what, and join the gm's group.
No thanes.


There was many others but I can't remember them all. Suffice to say I could see exactly why the bulk of DR decided to join RS instead. This was a massive boon for RS as it pushed us up to 20+ on average everynight.The guild growing so quickly did give me some cause for concern as I have seen many guild mergers or guilds just grow massively overnight and then just as quickly the bubble popped. I didn't want RS to become a guild of 2 camps of the old and new RS's doing their own little things within the guild. I quickly promoted some of the DR officers to RS officer status in a bid to try and make sure the guild acted as a whole. As it turned out I needn't of bothered. Both DR and RS were pretty much 1 of a kind anyway and there was never any question of little cliques being formed.

(Lack of) Valour of Valhalla. 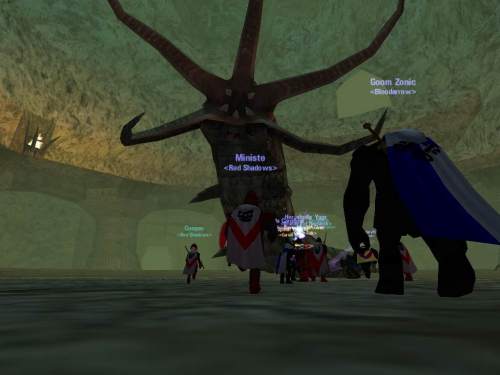 The RSA was growing steadily now and we no longer needed to hunt around for new guilds to join the alliance as they were now coming to us. One such guild was called Valour of Valhalla. They were run by a husband and wife combo called Andidna and Lavervira. VoV were about half the size of RS when they joined but growing fast, mainly due to the fact that /b in Aegirs was being spammed with offers for people to join their wonderful new guild. Things started off pleasantly enough and they told me that they had been on Hib previously but left there due to fallings out with all the elitist c*nts in that realm, something I could identify with.


After a week or so it started to become apparent that not all was well. My few conversations with the gm, although never nasty, used to leave me with the impression that he thought he was gods gift to gm's and he had little scruples about using people to gain more power for himself and his guild. I decided to keep an eye on him.


A couple of weeks later I was approached by the GM of a guild called Dragons Child asking to join the alliance. I accepted and they joined us one saturday morning. Within 3 or 4 hours the GM's of VoV started arguing with the GM of DC over the /as channel. I then got a pm from Andidna....

Andidna: Why did u invite an animal like that into the alliance, knowing we had booted him from VoV the day before?
Ste: Sorry m8, I wasn't aware that you had. If you had told me he was a trouble maker I would not of invited him to the alliance.
Andidna: Yes but we booted him last night, and you invited him this morning!
Ste: If you'd let me know when u boot trouble makers I could vet new apllications to the alliance better.
Andidna: I don't see why we should tell you everything that goes on within our guild.


Their argument continued in /as and I asked them to take it into a CG or stfu (Shut The Fuck Up). I then received another pm from Andidna stating that he was removing VoV from the alliance. I asked him if it was because of DC and he replied with ' no, nm, were leaving'. That was the end of that then. Or so we thought...

Ste - July 2003
And btw, vintergatan is now the lead guild in the alliance, but I think u'll also find, coincidently, that ur the only guild left in the alliance. Me informing VG that everyone had left the alliance, due to their recruitment policy's, and joined the new RS alliance.