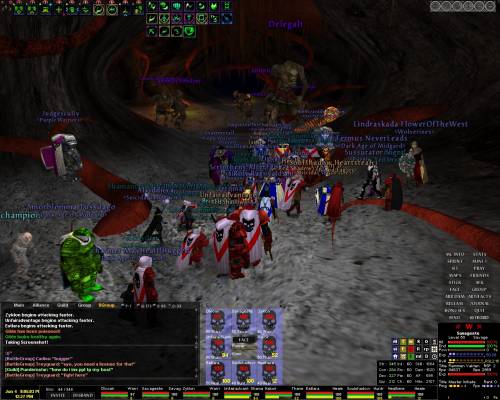 Long before TOA hit our shores most people knew that TOA was going to be bad for the game. It basically forced people into doing repetitive PvE to earn themselves overpowered items and abilities in RvR. The other problem was that a lot of the new adventures within the game required a lot of people to do them. This was fantastic for RS and the other large guilds but very bad for the smaller ones. I hate to think about how many small guilds were swallowed up by the larger, well established ones. RS itself grew to an average of 40-45 members online everyday. In fact we became the largest guild in Europe by a fair margin. We were even bigger than the guilds on the german servers sometimes topping 50+ members online at a time.


Why did we become so large? Well a large part of this was down to the fact that 2 of our Warlords, Frodoe and Eita, decided to try and get the RSA up to ML10. The first few raids were slow and quite painful at times but after a few weeks they had got the knack for them and everything went smoothly (that's not to say they wasn't any tantrums - trying to organise 50-60 people to work together can be quite frustrating).


The upshot of this was that, coupled with our open doors policy, people started flocking to RS and the RSA and our numbers soared. We wasn't the first guild to get members to ml10 but we were probably the most helpful to our members. Until people have tried organising events on this level I don't think they can fully appreciate the level of commitment and hard work that Frodoe and Eita put into these events, especially considering they would spend most of the week leading up to an event doing and redoing (several times) the prerequisites for each raid so that every member was at the correct point to get the credit for the ML's.


With TOA making the elite RvR guilds even more powerful and thus widening the gap between them and the more casual players the population of the realm started to decline. This was due partly because of the fact that RvR now became less interesting and also partly because the artifacts that people needed to compete would be overpriced or camped 24/7. The other major problem was that certain guilds within Midgard decided to put ethics on the shelf for a while and basically run around stealing encounters etc.They would be allowed to do this because of poor game design by Mythic and a poor COC (code of conduct) which didn't allow them to police the game effectively. Mythic could of argued that they would expect most people to show manners and principles but they hadn't counted on the fact that the game is also played by people with mental ages of 12 year olds. I don't know why but Midgard seemed to have a larger portion of these people and the GM's of the worst offending guilds often would taunt the rest of the realm over public forums. Midgard (on excalibur at least) had developed a Chav culture.


Thankfully RS managed to pretty much steer clear of any of these problems and any members who acted this way soon found they were looking for a new guild. 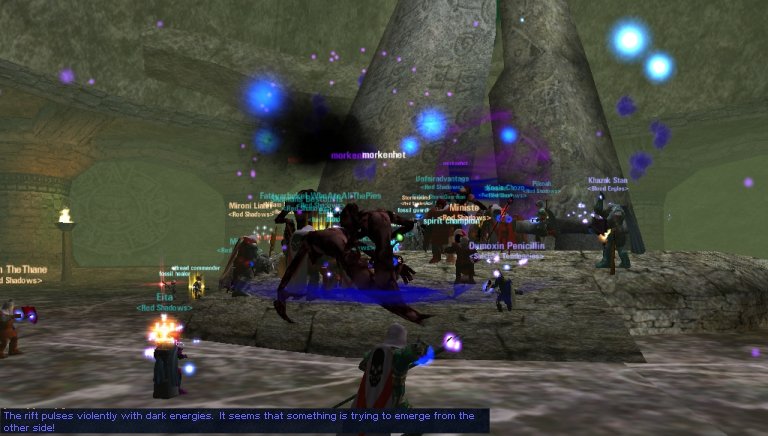 Not long after TOA started we were joined by a new member called Jarroman. He was a helpful member but was often quick to anger. His tantrums in the /gu channel were often ignored due to their frequency and usually trivial manner. This changed one day after he had had an argument with the guild and me imparticularly over the issuing of CTA's (Call To Arms - Basically the alliance drops whatever they're doing and quickly meets at Svasud to help defend the realm). The Albion's had been doing their usual thing and had taken Fensalir Faste. This was a regular occurrence and they used it as a rp farming exercise. Jarroman demanded that the RSA issue a CTA to help repel the invaders and it was disgusting that we weren't doing so (it was also amusing that a guildy later pointed out that he himself (Jarroman) wasn't helping defend the realm when arguing but xp'ing in DF at the time). After getting no success in the open /gu channel Jarroman started pm'ing me and telling me how RS should be run. After a while he stopped his arguments after he realised that I would only issue a CTA in emergency i.e. When the relics were under attack. Later that day Jarroman quit the guild, I and most of the other guild members just assumed that he disagreed with our CTA policy and decided to join another guild that better fit his idea of how to play. That was the end of that then. The /gu channel would revert back to normal and we could all get on with the game? No of course not. The drama queen hadn't quite finished with me just yet.


About a week later Nuxtobatns (a friend of Jarroman) announced in the guild channel
"OMG!! I have just heard why Jarroman left the guild"
This of course piqued everybody's interest and there was much spammage of "Well? why?". The reply given was
"Well I don't want to say much but a high ranking member of this guild asked him to leave before he booted him. I have to say I'm very disappointed".
Now this struck me as being very strange. All my officers would of just booted him if he had been making trouble. So I asked nuxtobatns who was the officer that asked him to leave. he replied with "Why do u ask?..U asked him to". Now I know my memory's bad but I think I would of remembered something like that! I then immediately pm'd Jarroman and asked him
Ste: Why are you telling people I asked you to quit the guild?
Jarroman : didn't u send a pm: plz leave the guild so as to not to kick u?
Very strange opening reply don't you think? Personally I would of replied with something along the lines of "Because you asked me leave!" or "because that's what you said!" This basically told me that he was either lying or he was at least unsure as to who had sent him the pm. Most people who have been asked to leave a guild tend to at least make sure it's an officer who asked them first. We continued to argue for most of that night, usually going around in circles as to what had actually happened. Jarromans stance often shifted from: it was me, to some RS *&^* wanted him out and had done it, to a badly timed mt. Either way he should of read the pm properly but didn't. He also refused to acknowledge that someone could of typed /t jar plz leave the.... as he had a very unique name. After I produced a list of 11 names from Duskwave that all started with JAR he told me that it was still impossible and that the list I had provided him with was illogical (So much for Greece being the birthplace of modern mathematics and logic).


To this day we still don't know the full story behind what happened. I know that I certainly didn't send him any pm's asking him to leave, I suspect only Jarroman himself would know the full story behind this little drama. I personally believe that he quit the guild in a huff and when his mate, who was still a RS member at the time, asked him why? He made up this cock and bull story about how the big bad GM had bullied him out of the guild and he had quietly gone. To be fair to him it does sound better than 'I had a sulk and quit the guild to show them how much they had pissed me off'. Maybe he had expected us to try and recruit him back and patch things up and he was upset that we hadn't so he tried to get more members to leave by spreading nasty rumours?

Anticipation of the New Frontiers

Treyguard Aug 2004
So in defiance of type, Ste decided you needed to leave but couldn't bring himself to do it and you went meekly without any complaint?
Doesn't sound right, not right at all.
Treyguards reply on the RS forums to Jarromans explanation of what happened and why he left the guild